A Cosmos in Crisis

Bahar Behbahani is a New York-based artist of Iranian descent whose research-based practice approaches landscape as a metaphor for politics and poetics. Through a range of media—such as painting, video, installation and performative talks—she questions how people negotiate space and place. Her site-specific installation in Lahore, Pakistan encompasses the philosophical, geopolitical, social and ecological while raising questions for the future of creative resistance and environmental justice.

For centuries, inhabitants of these regions oriented themselves with reference to the sun, the moon, and the constellations. How might we reflect on our place within the cosmos today, at this conjuncture of planetary climate crisis and polarities between societies?

Culture and Climate in the Work of Artist Bahar Behbahani 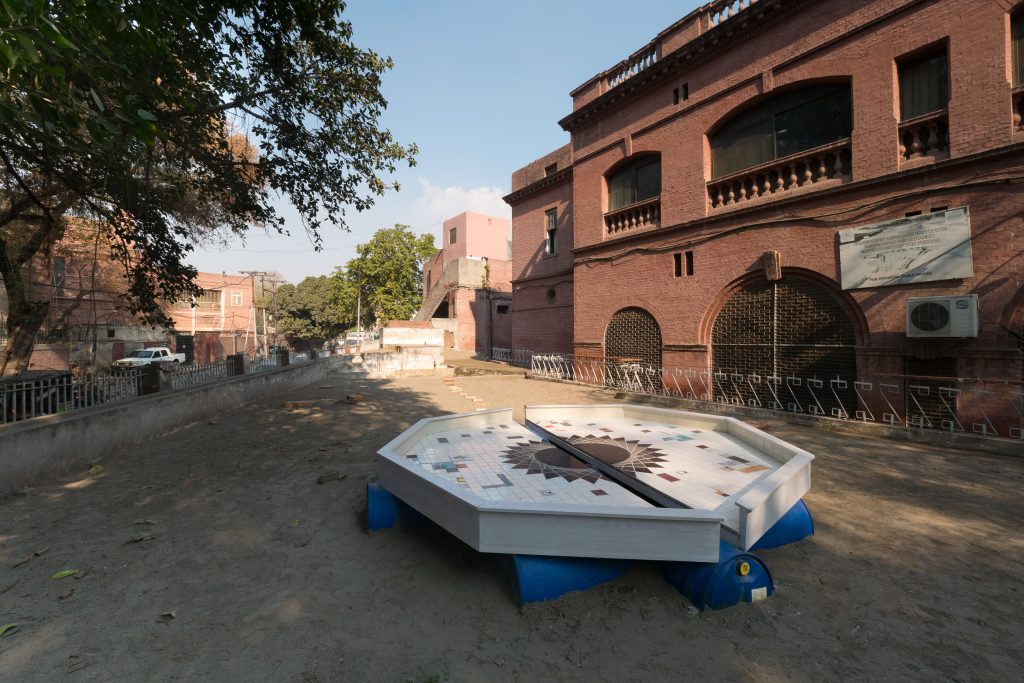 Bahar Behbahani is an Iranian multi-disciplinary artist who lives and works in Brooklyn, New York. Her first public artwork All water has a perfect memory (2019), conceived at Wave Hill, New York, used water and garden imagery to help viewers connect to “invisible stories—the physical or spiritual traces and patterns on nature which our ancestors left us.” Her exploration into the concerns surrounding water and contested rivers then took her to Lahore, Pakistan where her largest collaborative and permanent site-specific installation to date, I Can Drink Stars (2020), was commissioned by the Lahore Biennale 2020 (LB02) “Between the Sun and the Moon” held between January 26 and February 29, 2020. 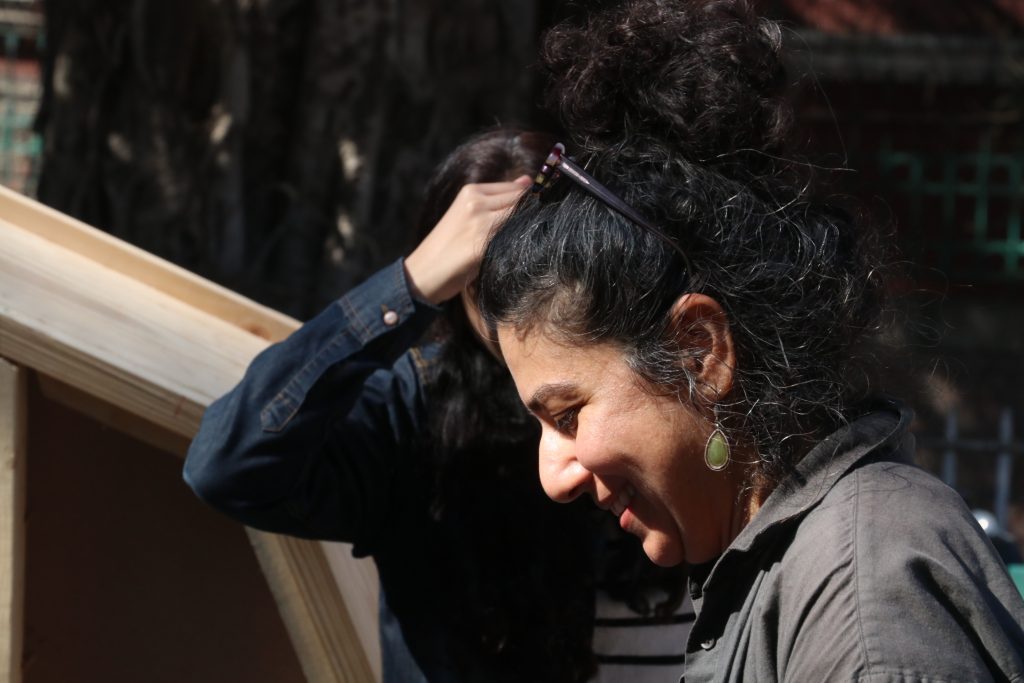 Curated by Hoor Al Qasimi, director of the Sharjah Art Foundation, the biennale focused on the Global South—“where ongoing social disaffection is being aggravated by climate change”—and was held at various cultural and heritage sites throughout the city of Lahore. Behbahani undertook eight months of research before setting out to Pakistan to develop the artwork in partnership with Jameel Ahmad, a local artisan, his team, and the Punjab Irrigation Department. Her sculptural intervention is located on the ruined miniature model of water management of the Ravi River, which is situated on the grounds of the Punjab government’s Water Irrigation Department in Lahore. The installation examines the complicated history of shared rivers and the entanglement of coloniality with cartography, extractive economies, and geological surveys. Specifically, the waters of the Ravi River (along with the Beas and Sutlej) are allocated to India under the Indus Waters Treaty— a water-sharing treaty signed between India and Pakistan on September 19th, 1960—whereas the waters of the region’s western rivers—the Indus, Jhelum, and Chenab—are under the jurisdiction of Pakistan. 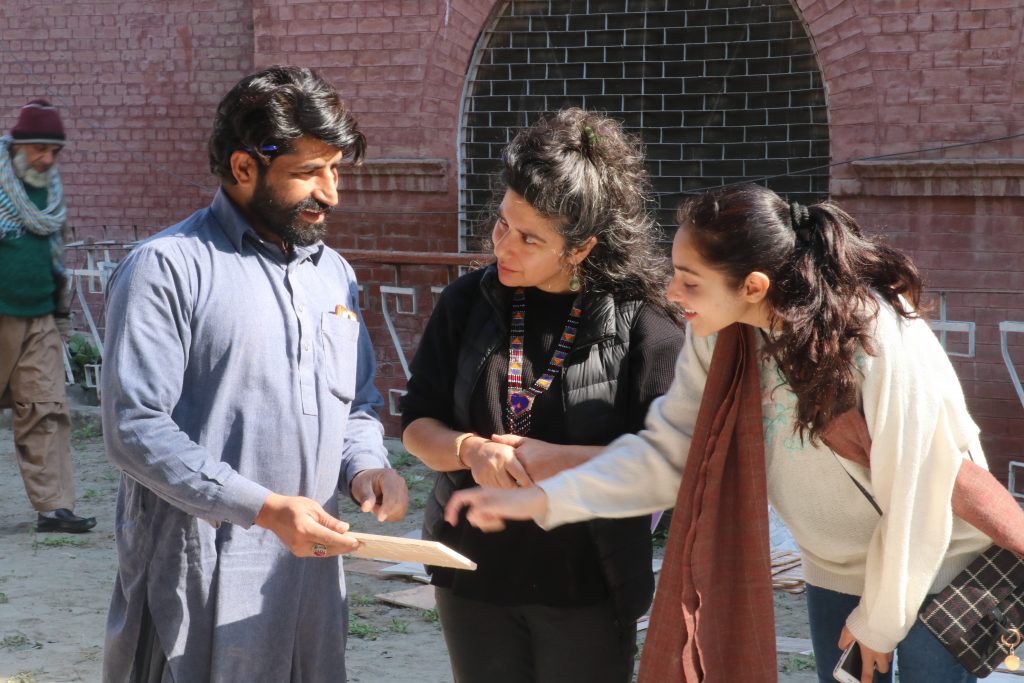 Bahar Behbahani (middle) and her team, selecting tiles for the installation. 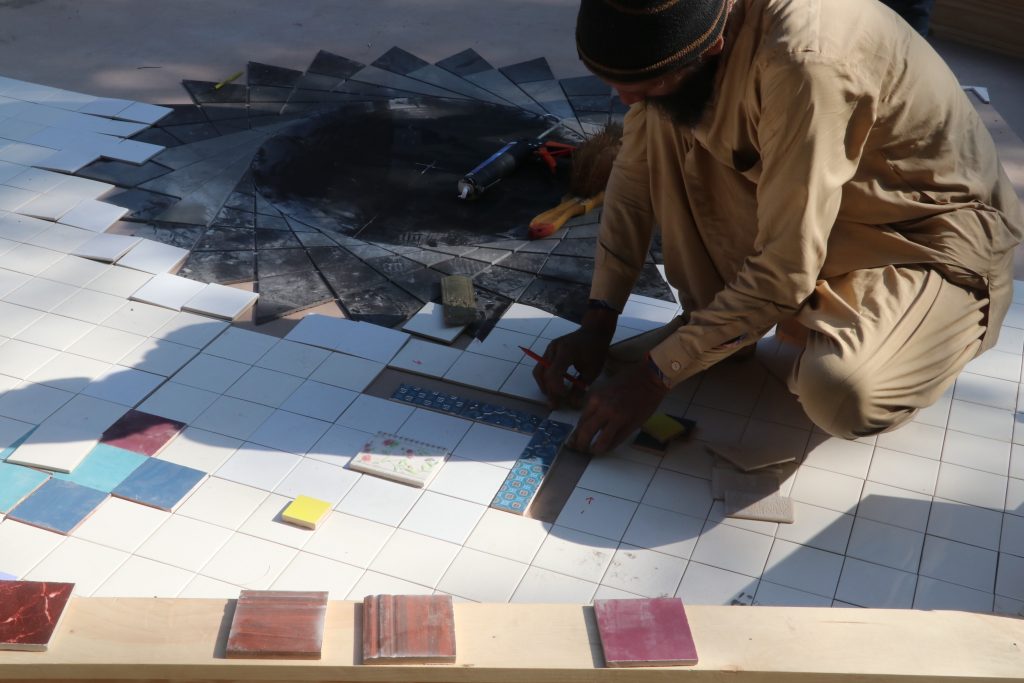 The conceptual piece consists of an octagonal pool structure (a geometric form that ancient Persians believed kept water pure) which is split into two, evoking ideas of uncertainty and division, and mounted upon plastic water barrels that suggest this floating vessel could be moved during an emergency such as a flood. The basin is filled with a patchwork of tiles from local construction sites to reimagine the fragments of cultural heritage and contemporary city life. 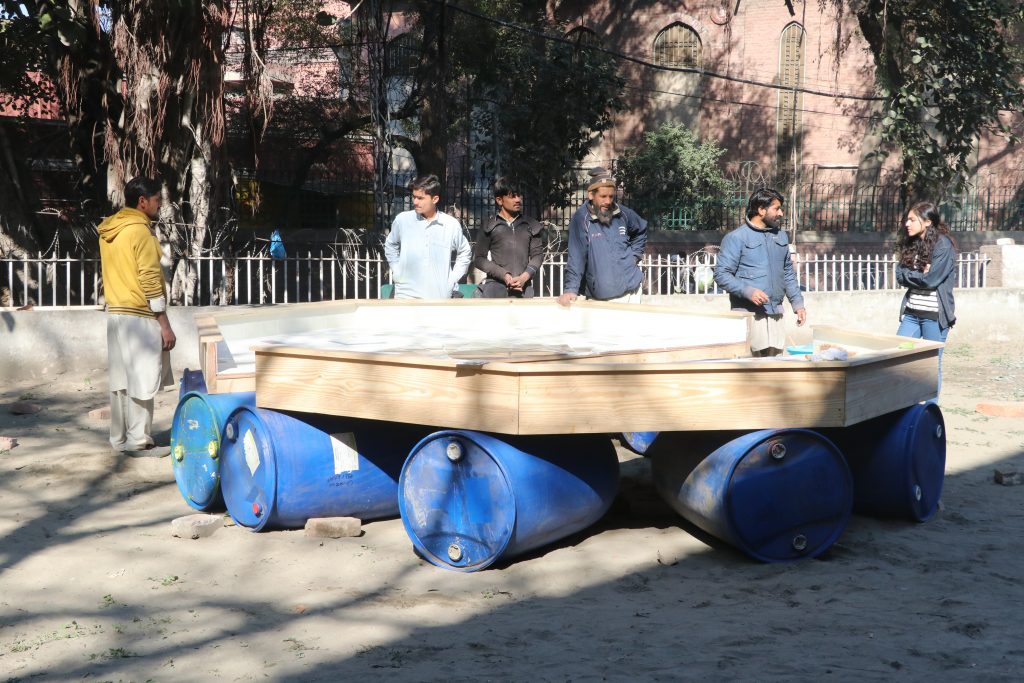 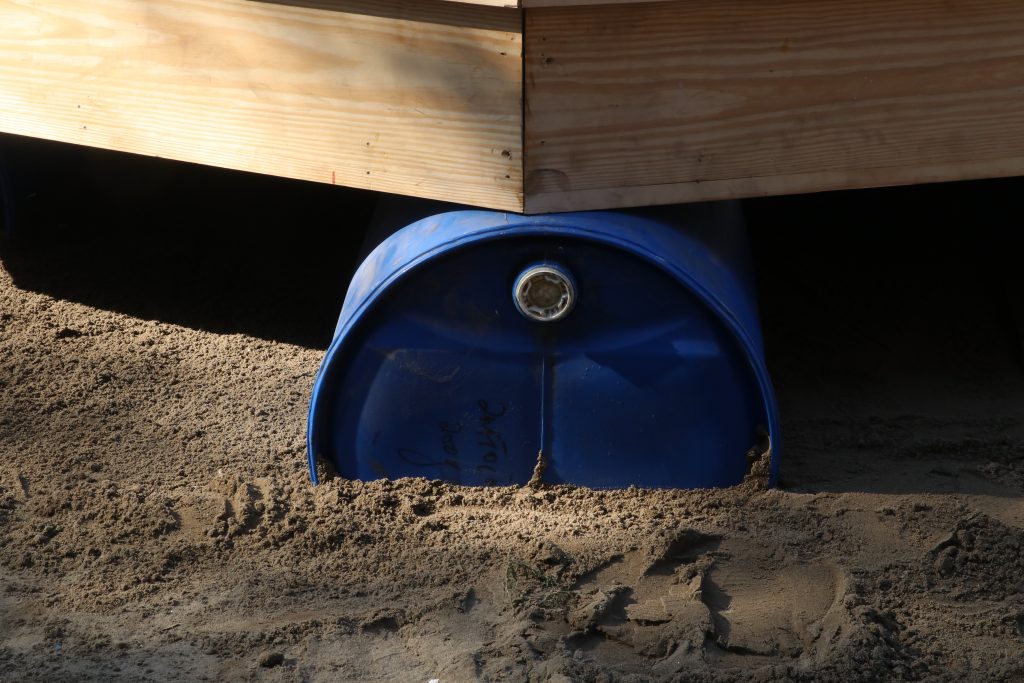 Working alongside the local community and the government’s Irrigation Department, Behbahani makes a lasting statement on transboundary rivers, water justice and climate change by bringing awareness to conflicts over water and waste of a precious resource. The water of the Ravi River, part of the Indus System, finds its source in the Himalayas and is shared between India and Pakistan. Even if the two halves of the structure were to be joined together, any water would still find its way out through the cracks. While exposing technocracy, Behbahani’s work poetically and accurately reflects upon the socially and environmentally-minded curatorial statement of the biennale that gave birth to it. 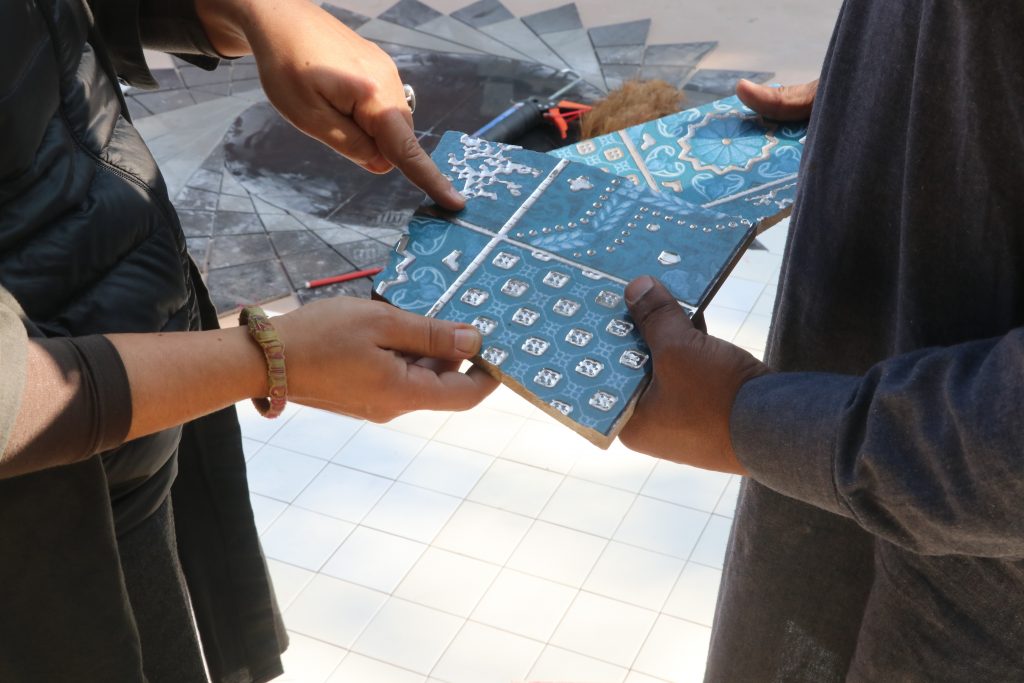 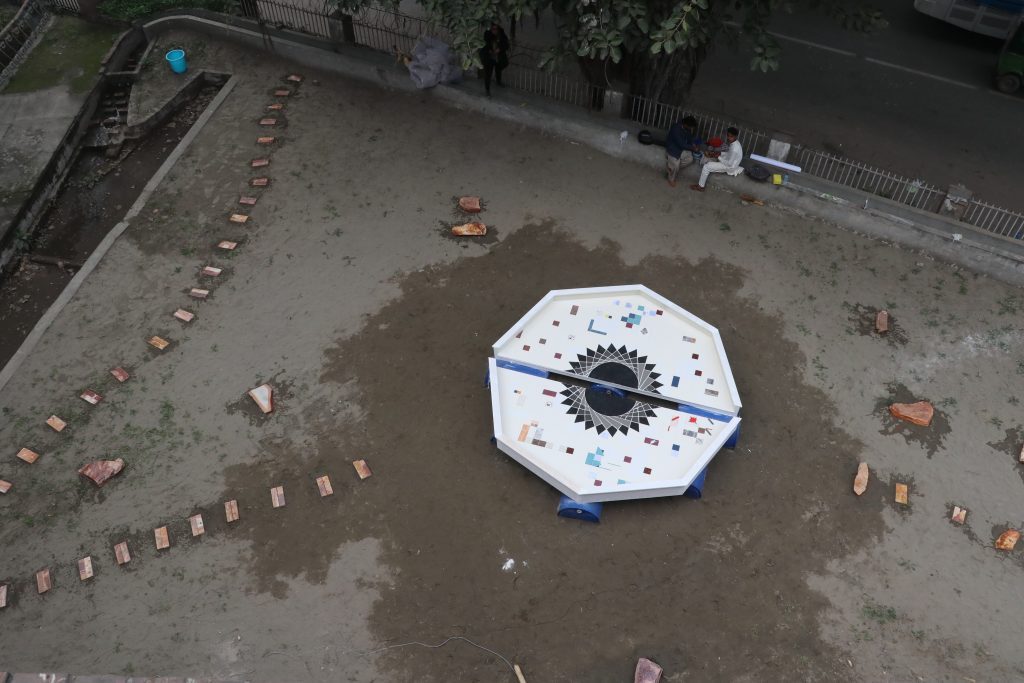 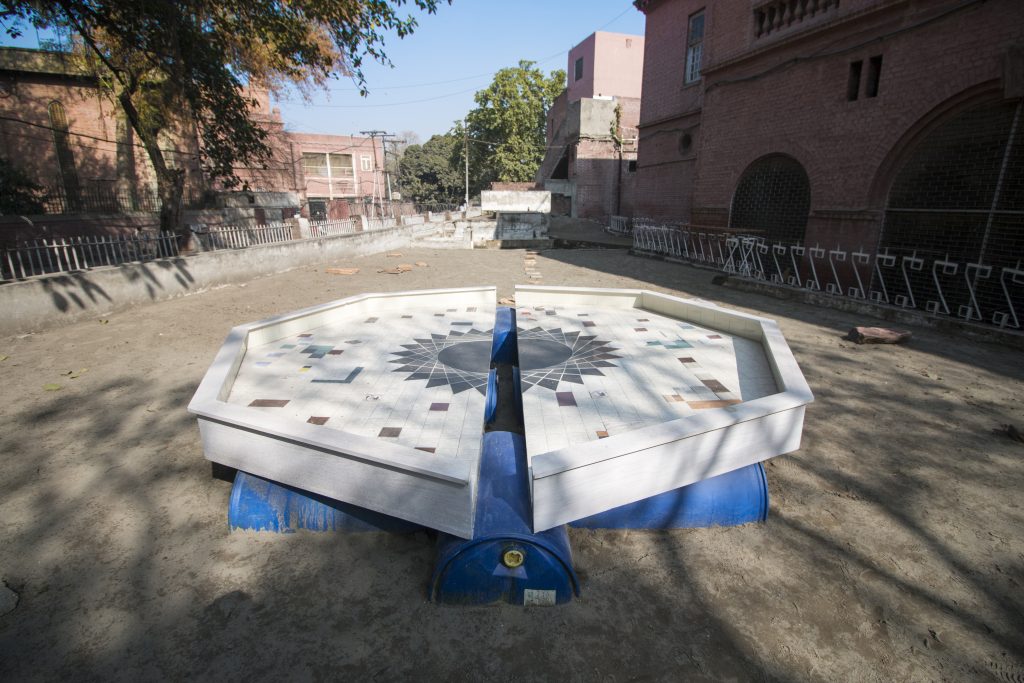